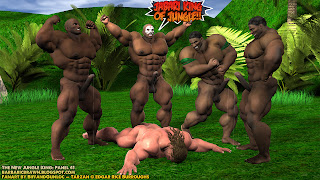 All four of the Mogu stood tall and proud over the drained and battered body of the white musclestud known as Tarzan.  Never again would any in Africa feel pressured by the fallen king to obey his will or suffer by his hands.

The four flexed their muscles and grunted in victory over Tarzan's downfall.  They bounced their pecs and stroked their hard, leaking cocks.  It was a day none of them would ever forget.

Not only had their brother, Jabari, returned to their tribe, but he had also done what many had felt impossible: he'd defeated Tarzan!

Tarzan lay still and struggled to control his quivering.  By law of might and muscle, this man was now his master and had taken his position of power.  This man would surely fuck him deep, he realized with horror.  He now belonged to Jabari for as long as the triumphant black man wished, and he knew that this master would be neither kind nor gentle to him.
Posted by Lucky Stallion at 2:23 AM