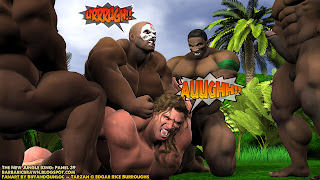 SLAM!!  Jabari brought his mighty fists down upon Tarzan's trap muscles with a deep, manly growl of satisfaction!

Unable to brace himself for the impact, Tarzan took the full brunt of the attack!  Njau and Zuberi held Tarzan's arms secure as he bellowed and struggled, preventing him from escape.

Jabari raised his fists high once more and brought them down hard upon Tarzan's battered traps!  A low, agonized groan escaped Tarzan's mouth.  One last blow knocked the fight from the ape man, and with a grunt, his head fell to the ground.

Kondo knelt by the white man and grabbed hold of his long, flowing hair.  He lifted Tarzan's drooping head and held the tip of his hard cock before his enemy's mouth.

Tarzan opened his eyes and stared wearily at the large, purple knob of the native's massive, black cock and groaned.  The head of Kondo's excited manhood was leaking precum in ribbons.

The overpowered jungle king decided to surrender to the inevitable and pressed his quivering lips to the black savage's wet cockhead and kissed it reverently.  Kondo smiled and stroked Tarzan's head like a man might a beast.  Lips wet with the man's sticky fluid, Tarzan was released from his conquerors' hold and dropped to the ground.

That last humiliating act of submission had finally broken Tarzan's will.  The long-reigning king of the jungle was at last dethroned and in his place ruled Jabari.
Posted by Lucky Stallion at 4:20 AM