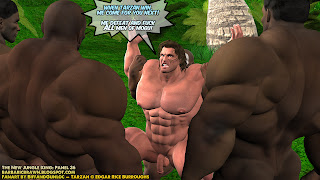 Tarzan snarled and attempted to lash out at his onlookers, but Jabari's arms held strong and prevented him from moving.

"When Tarzan win," he bitterly threatened, "me come for you next!  Me defeat and fuck ALL men of Mogu!"

But despite his best attempts at intimidation, the three journeymen who only just that day surrendered their precious jewel to the ape man were no longer afraid of him!  Their chests swelled with the pride of their tribe and knowing that their new hero, Jabari, was restraining this pale-skinned savage gave them all the courage they needed to stand their ground.

Tarzan growled and again tried in vain to fight against his foe's hold.  Snorts of humor shot from Kondo's and Njau's nostrils as they smirked at him.
Posted by Lucky Stallion at 2:01 AM