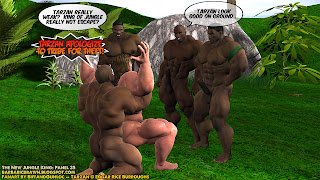 Jabari released the hold and moved to lift the jungle lord by his hair.  Tarzan moaned in pain and rose obediently to his feet.  Before he could rise any more, the black warrior hooked his arms around Tarzan's, keeping him still and down and forcing his nude body to be exposed for the three to take in.

As they stared with arousal at his futile struggles, Kondo, Zuberi, and Njau grew erect.  The hero, Tarzan, was incapable of defeating the hold!  Tarzan stared with jealousy at their large manhoods -- even these simple journeymen were bigger than him!

But the ape man would not speak!  He maintained a proud face to minimize the burning humiliation he felt inside.  The three Mogu looked at him with utter skepticism.  This was the Tarzan that had ruled over them all for so long?  This was the man who kept them all in line by beating his large pecs and shouting his famous call?

Njau remained silent as he watched Jabari manhandle the king with delight.  For the first time in a good long time, it seemed as though Tarzan might finally be defeated.  And that it was one of their own punishing him gave Njau the greatest pleasure.
Posted by Lucky Stallion at 3:34 AM