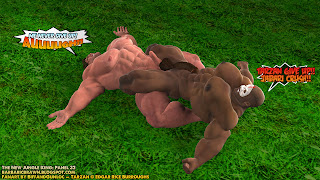 Lacking the energy to put up much resistance, Tarzan felt Jabari's beefy legs wrap around his rock-hard torso and slide like a snake under his chiseled back.  The Mogu's big, heavy balls rested atop his own, covering them in a layer of his opponent's sweat.  Tarzan had no idea what this hold was, but he knew instantly that he didn't like it.

"TARZAN GIVE UP!!" the black man roared for Tarzan's surrender, knowing that the arrogant jungle king wouldn't give up without some pressure.

"Me never give up!" Tarzan answered the call defiantly!  At that, Jabari began to squeeze his powerful, black limbs around Tarzan's waist, constricting them without mercy!

Tarzan screamed and writhed in the body scissors.  The hold was excruciating, yet he didn't want to admit defeat!  He was Tarzan!  Tarzan surrendered to neither man nor beast!

"JABARI CRUSH!!" the native bellowed over Tarzan's anguished grunts and screams, applying even greater pressure to force a submission!
Posted by Lucky Stallion at 2:19 AM