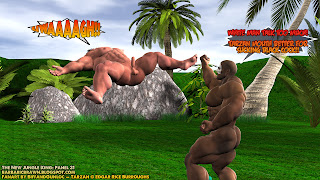 Again and again, Jabari slugged Tarzan in the face -- one for every punch the ape man had given him.  Tarzan could only stand there and take the onslaught.

"WHITE MAN TALK TOO MUCH!" his furious challenger bellowed.  "TARZAN MOUTH BETTER FOR SUCKING BLACK COCK!" he ended with a finishing uppercut, sending Tarzan flying into the air, roaring in pain!

Tarzan fell to the soft grass, grateful to be able to away from Jabari's fists for even a moment.  His nude body was spread eagle and totally exposed to his leering, towering opponent.  The only other thing the jungle king could feel (besides searing pain in his face and belly) was the shame and humiliation of finally having matched muscle with a man whose skill was clearly greater than his own.

Tarzan had grown soft over the many months since Jabari's absence from the Mogu.  He was powerful, but he relied far too much on intimidation to bully the natives.  His complacency had given Jabari all the time he needed to train and become a greater protector of the jungle than Tarzan ever was.

And now the white jungle king was reaping the consequences.
Posted by Lucky Stallion at 1:34 AM