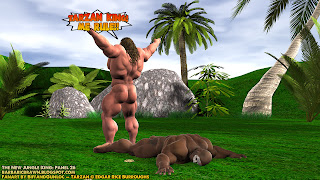 Satisfied with his dominance over Jabari, Tarzan allowed him to fall to the ground.  The white jungle lord raised his arms high and bellowed, "TARZAN KING!  ME RULE!!"

The ape man beat his pecs and grunted in triumph.  He brought his hand down to his cock and gave it a few rough strokes.  Fighting with this native had given him an urge to fuck.  Both men were well aware of one of the most basic laws of the jungle: loser gets fucked.

Tarzan would relish this penetration more than any of his others over the past few years.  This black muscleman thought that he would challenge and dethrone Tarzan from his title and position as King of the Jungle.

He felt satisfaction with this preliminary destruction of Jabari.  He would enjoy this fuck and then, after he'd deposited his seed in that hot, black butt, he would continue to punish and sexually humiliate the Mogu.  Finally, once he sated his lust for sex and wrestling, he would carry the native back to his tribe, hold him high overhead and demand the others kneel before him and pay tribute to his greatness.  It was good to be king.

And yet, as Tarzan stroked his cock to these lewd daydreams, he never noticed Jabari grit his teeth and raise his head...
Posted by Lucky Stallion at 12:53 AM