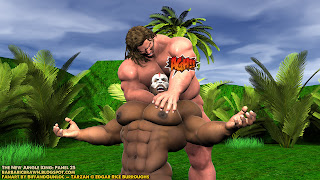 Just as Jabari managed to free himself from Tarzan's mighty grasp, the jungle king was on him again, this time holding him back by his neck!  The dull pains in his balls and head distracted him, delaying his escape.

Tarzan reached down and grabbed Jabari's beefy pec.  He squeezed down hard, viciously groping the powerful chest muscle!  He had to admit, Jabari's body was impressive -- perhaps on the same level as his own.  But he would see to it that this native not only learned his place in Tarzan's Africa, but the body that he so brazenly used to challenge his authority would be broken down and punished.

Dragging his fingers up, Tarzan roughly clawed at the black man's large pectoral flesh.  Jabari bellowed in pain as his tormenter slowly worked his chest over!

The ape man took full advantage of Jabari's inability to fight back.  He clawed, slammed, and squeezed Jabari's pecs without mercy.  His fingers pinched and tugged at the Mogu's already puffy nipples, causing the purple nubs to swell and grow even bigger.
Posted by Lucky Stallion at 1:58 AM