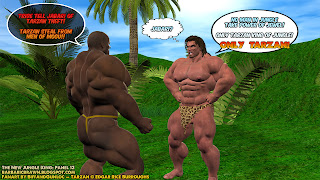 Jabari stood up to the white man in a way that few had even dared to dream about.  He glared Tarzan's way and thrust his mighty pecs out in a manly display of strength and courage.

The man's arrogance surprised Tarzan.  He recognized the symbol painted on the native's face as belonging to the Mogu tribe, but he couldn't remember who this man was.

Jabari's departure from the Mogu was quick and mysterious.  He'd left his brethren without a word in order to train his mind and body in the wild.  His ultimate goal was the destruction and dethroning of the king of the jungle.

Over the past several months, Jabari secluded himself in a part of the jungle Tarzan rarely visited.  By day, he wrestled beasts, swung through the trees, and lifted heavy rocks to strengthen himself.  At night, he masturbated his hefty black cock to the thought of Tarzan succumbing to his might.  He knew that one day, his cock would enter the jungle king and breed him into total submission.

It was by chance that on the day of Jabari's return, he would witness Tarzan's outrageous actions upon his own tribesmen.  He thought it the will of the gods that he be there to fulfill his goal and strip the ape man of his title as king of the jungle!

"Jabari?" Tarzan wondered silently.  The name seemed familiar, but the man didn't match the Jabari he remembered.  No matter, he figured.  He would settle this quickly and leave for the sanctuary of his treehouse home to polish his new earthborn possession.

"No man in jungle take power of jewel!" Tarzan snapped back with equal force.  "Only Tarzan king of jungle!  ONLY TARZAN!"
Posted by Lucky Stallion at 2:25 AM