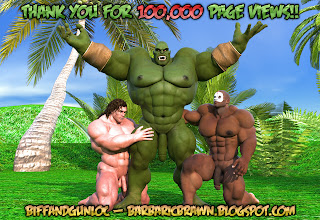 Overlord Krag, leader of the dominant orc race, set out from his mighty empire in search of new lands and new humans to conquer.  The titanic, green brute happened upon two muscular men locked in the heat of combat.

Amused, he watched them fight.  These humans would do well as slaves back at Grohmah, he thought to himself with a snort.

The orc soon leapt into the fray and quickly pummeled both men into submission!  The pale one cried out his surrender first as Krag buried his middle finger to the knuckle inside the human's hole.  The dark-skinned human managed to hold out for a moment longer, but the monstrous stranger's headlock forced him to give in, as well.

As Overlord Krag introduces these two studs to their new life of orc rule, I want to say thanks to you guys for visiting and bringing Barbaric Brawn to its 100,000th page view.  It's only been about 10 months since its open, but I never imagined it could have grown this fast.  That's all because of you.

Thanks again to all of the barbarians out there.  Keep that spirit of wrestling in your heart and your love of men fighting men burning hot!
Posted by Lucky Stallion at 12:22 PM