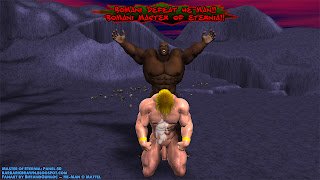 His booming voice carried across the lands, telling every living creature on the planet that the hero known as He-Man was vanquished!

The white barbarian, lacking the strength to stand on his own, sat on his knees before his master and bowed his head in submission.

He pushed those thoughts aside and tried to think of nothing except his new life serving under Bomani.

His lips and hole felt so empty now.  He felt a stir in his loins.  No matter how hard he tried to push it away, a new thought dominated his mind: when would his master fuck him again?
Posted by Lucky Stallion at 12:58 PM