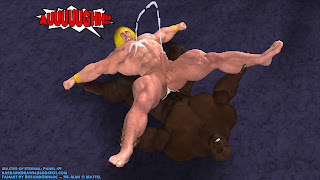 An orgasm like none he'd ever experienced rocked He-Man's beefy body!!

The muscleman shouted in heat as his cock spurt rope after rope of thick cream high into the air!

For the first time ever, He-Man, the most powerful man in the universe, had been defeated, fucked, and fully seeded by another man!

The stranger who'd come to claim his power as his own had succeeded.  The power that gave He-Man his mighty muscles would live on forever in Bomani!

Bomani let his hard cock stay within He-Man as it continued to flood his tunnels with his essence.

He-Man collapsed, panting and moaning as his own manhood eventually stopped spurting.
Posted by Lucky Stallion at 1:30 PM