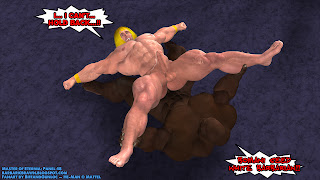 The Eternian soon found himself on his back, spread eagle and at the mercy of the African.

Bomani grasped He-Man's legs and forced him to fuck himself upon the mighty black shaft nestled in his hole.