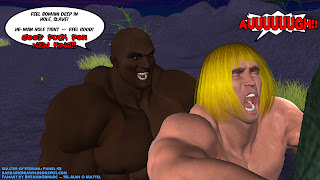 With one last thrust, Bomani shoved the last few inches of his meat into the white man's backside!

"AUUUUUUGH!!" He-Man screamed.  But the sudden pains that tore through him soon faded!

Bomani held onto the stud's hips and began to power fuck him.  His groin slammed repeatedly into He-Man's bubble butt, forcing every inch of his massive cock forward!

He-Man was just as good a slave as he'd hoped!  He fucked his conquest fast and hard, savoring every second of his domination over the Eternian!

"GOOD FUCK FOR NEW KING!!" he roared over the blond's screams!
Posted by Lucky Stallion at 2:15 PM