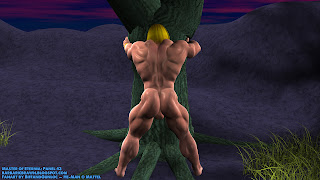 By his master's direction, He-Man grabbed hold of the tree and spread his legs apart.

Bomani licked his lips as he stared at the sight of his musclebound slave in full submission.

He-Man quivered in anticipation for what was to come.  He could feel Bomani's hard eyes staring his body down.

There was nothing that he could do.  With the Power of Grayskull, Bomani would easily subdue him in no time -- and quite possibly ruin his backside for life.

His allies wouldn't come looking for him.  They were back in the castle, celebrating his victory without him present.

Battle Cat was no good, either.  That lousy beast had probably lost his sword and chest armor someplace -- though it wouldn't do him much good now anyway.

He-Man's train of thought instantly derailed the moment he felt the firm hands of the black stallion grasp his hips.

Bomani was ready to fuck.
Posted by Lucky Stallion at 1:32 PM