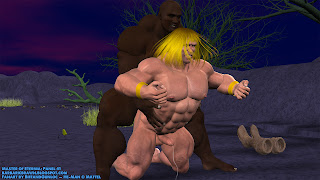 Bomani wrenched the Eternian's boots off and tossed them aside.

He easily turned and brought his slave his knees with little effort.

There was no doubt, He-Man realized: Bomani was in full possession of the Power of Grayskull.

The black savage, amused by He-Man's repeated grunts of shame, mounted his butt and placed his cock between the white barbarian's cheeks.

He-Man was humiliated as his master grabbed his sides and began rocking him back and forth.  He felt Bomani's thick manhood glide between his firm butt cheeks, teasing him without mercy.

The Eternian's cock spurt a healthy flow of precum from its head, letting the world know of his arousal.
Posted by Lucky Stallion at 1:28 PM