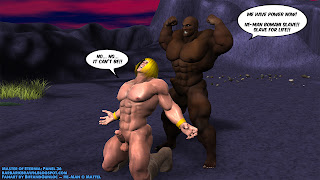 The African flexed, showing off his newly-infused body!

Thanks to the shaman's spell, his muscles had grown in size to match his increased strength.

He-Man, on the other hand, thrust his diminished pecs and abs to the sky and cried out in defeat.

"Me have power now!" Bomani gloated, running his hands over his bigger, harder muscles.  He could feel the power emanating from them!

His first act would be the complete domination and enslavement of the blond barbarian.

He never dreamed that losing the fight to this savage meant the weakening of his mighty muscles!

Yet, despite all of it, he still remained hard for Bomani.  Perhaps because the savage not only attracted him before, but now, without the Power of Grayskull, he felt more easily swayed by the might of a stronger man -- to seek protection under the new champion.
Posted by Lucky Stallion at 1:02 PM