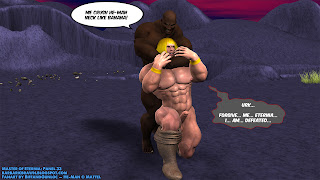 But Bomani's final move upon the musclebound Eternian would prove to be too much for even the mighty He-Man to endure!

The black warrior wrapped his beefy arm around He-Man's throat and squeezed him tight in a sleeper hold!  If He-Man wouldn't submit, he'd have to put the hero out!

"Me crush He-Man neck like banana!" he promised, doubling up on the pressure.

He-Man struggled and thrashed, but his opponent was too powerful!  He was rapidly losing oxygen!

Realizing that it was all over, He-Man lowered his arms in unconditional surrender.
Posted by Lucky Stallion at 12:19 PM