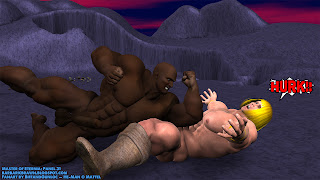 "HURK!!" the Eternian grunted as Bomani's elbow made contact with his gut!

He-Man began to have doubts about victory. The earlier battle against Skeletor and Tri-Klops had taken a lot of his strength -- and now, this fight with the alien stranger was proving more than he'd anticipated!

Bomani was enjoying this much more than he thought he would. The white barbarian was proving to be quite a capable opponent. Lesser men back home would have given in long ago.

A part of him was happy that He-Man had yet to admit defeat. He wanted to make this man suffer as long as he could.
Posted by Lucky Stallion at 1:07 PM