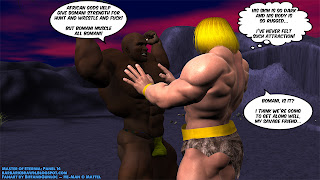 Bomani couldn't believe his luck!  He-Man was enamored by his body!  If the Eternian wanted a look, what was the harm in giving him one?

He lifted his powerful arms and gave a double bicep pose.

He-Man reached out and placed his firm hands atop the hard, pillowy pecs of the ebony stud.

"His skin is so dark and his body is so rugged..." he thought silently.  Not even Skeletor, whose muscular body lifted his loincloth on my occasions, flexed so hotly.  "I've never felt such attraction!"

He-Man's touching grew more and more lewd with every inch he felt.  His fingertips ran over Bomani's erect nipples, making him grunt.