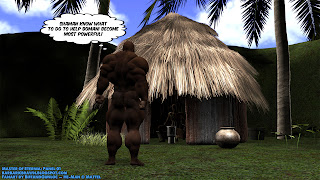 Bomani, son of the strong and victorious black king Kugo, stood before the hermit shaman's hut somewhere in the jungles of his homeland.

The African prince clenched his fists and scowled.  What if the shaman couldn't help him?  He'd have to go back to the coldness of his father's shadow once more.

Kugo's growing arrogance annoyed him most of all.  The way he strutted around the various tribes, the Barbarian slave Tuskar crawling with him like a pet, receiving praise from all of the tribesmen as he went along.  It all annoyed Bomani and fueled his jealousy.

No, he thought to himself!  He wouldn't take it anymore!  He was determined to become stronger than his father and wrestle him into submission once and for all!

"Shaman know what to do to help Bomani become most powerful!" he thought to himself, strengthening his resolve.
Posted by Lucky Stallion at 12:45 PM