This is a small collection of a split in the timeline where Lortho surrendered to Gorg instead of passing out and being sent straight to Grohmah. 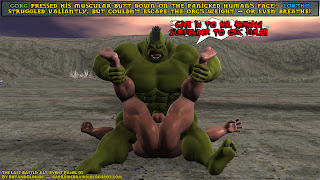 Ready to end the fight with this annoying human, the orc Gorg pressed his muscular butt down on the panicked human's face!!

Lortho struggled valiantly, but couldn't escape the orc's weight -- or even breathe!

"GIVE IN TO ME, HUMAN!" the orc snarled angrily. "SURRENDER TO ORC RULE!!" 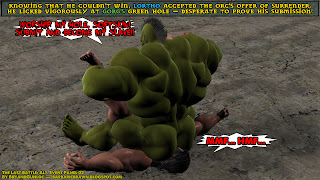 "WORSHIP MY HOLE, SOFTSKIN!  SUBMIT AND BECOME MY SLAVE!!"

Knowing that he couldn't win, Lortho accepted the orc's offer of surrender.

He stuck his tongue out and licked vigorously against Gorg's green hole -- desperate to prove his submission was real!

"Mmf... hmf..." he grunted between the orc's hot cheeks and rested his arms against the ground.  He slid his tongue slowly against the puckering hole nestled inside his master's butt. 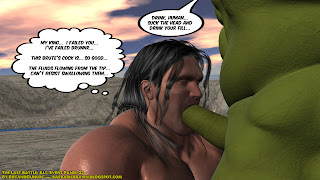 Lortho knelt before his new master and looked up to see the orc flexing his powerful body.  The human's cock stiffened at the sight of the green bodybuilder showing off his chiseled muscles.

As if by instinct, Lortho lowered his face and took the head of Gorg's cock between his lips.  The bulbous head stretched his mouth wide, and he struggled to fit as much in as he could.

Almost immediately, Gorg began to secrete his thin and sweet sap of arousal.  It flowed freely into the slave's mouth and down his throat.

"Drink, human..." the orc grunted as he hit a most muscular pose.  "Suck the head and drink your fill..."

And drink Lortho did.  The human muscleman moaned quietly as he nursed the cockhead of the one who defeated him.

But as he continued to drink Gorg's precum, he began to think that this fate wasn't so bad after all.  The orc's cock didn't taste nearly as bad as he had expected; it was earthy and rich -- much different from man's.

Soon, Lortho began to suck his master in earnest.  His head bobbed up and down upon the steely shaft of the victorious orc.

Gorg grunted and struck a double bicep pose.  It'd been a long, long time since he'd been worshiped by such a studly man. 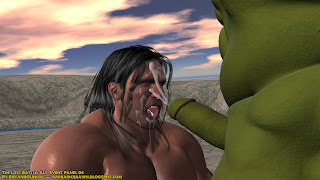 The orc's cock rumbled violently!  The human had a split second to pull away before it erupted!

Gorg shouted in pure ecstasy as he came.  Jets of thick orc semen shot from the head of his cock and splattered the face of the man.

He couldn't believe how low he had fallen.  He had traveled so far and was almost at his destination.  And now, he'd surrendered to one of them.  He was now a slave to the mighty Gorg. 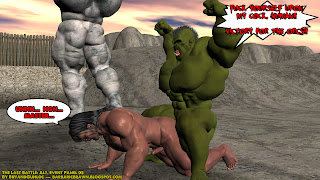 "FUCK YOURSELF UPON MY COCK, HUMAN!!" Gorg roared unsympathetically.  "VICTORY FOR THE ORCS!!"

Fully resigned to his fate, the defeated human began the task of pushing his butt back against the hefty cock that finally bested him.

The End
Posted by Lucky Stallion at 3:24 AM