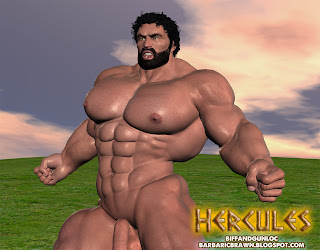 Mighty Hercules, son of Zeus and hero of men.

Many across the lands know of the demigod's acts of heroism and courage.  When their paths should happen to cross his, none can refuse the chance to kneel and worship the muscular godling.

Men tell of the incredible poses Hercules strikes as they drink the nectar from his awesome cock.  They speak of the mountains of sculpted marble that comprise his entire body; how he bounces his enormous pectorals as reward for their worship; how he is unafraid to let mere mortals touch and caress his toned rear.

With every new feat of heroism, Hercules cements his place in history!
Posted by Lucky Stallion at 2:06 PM