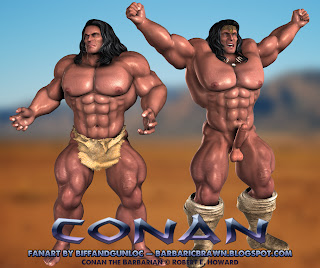 Conan, the barbarian of legend, finally makes his way to Barbaric Brawn!

Conan the Cimmerian has always been my favorite barbarian, and Arnold Schwarzenegger's portrayal of him in the 1982 and 1984 films has only heightened my love of the character.

Now that I'm better at rendering these studs, I wanted to try my hand at crafting Conan.

I went for more of a Frazetta look than the version that Arnold played, and somewhat based him on the animated series, Conan the Adventurer.

On the left is slave Conan, stripped of everything and given his only possession of a slave loincloth.  This Conan is forced to wrestle and fight for the amusement of his owners.  Spectators pay large amounts of money to watch a man as big as the Cimmerian lose to his foe and be fucked.  With some unfair rigging to subdue his strength, that's almost always what happens.

On the right is Conan as a free barbarian, showing off his proud erection (the only sword he really needs) before he buries it deep inside his cowering, defeated opponent.

Obligatory: Conan the Barbarian is © Robert E. Howard.  This is a work of fanart.
Posted by Lucky Stallion at 1:50 PM