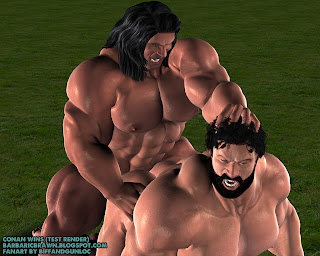 A warm summer breeze blew over the valley where the two gargantuan studs had come to settle their differences.  Conan, the barbarian flexed his powerful, muscular body for Hercules, the demigod son of Zeus.

Their battle was fought long and hard, but only one man could emerge victorious.

Conan mounted the defeated Hercules and shoved his thick, leaking cock inside the Greek's tight hole!

Hercules grunted and moaned in arousal as the barbarian wasted no time in breeding him to the hilt.

The Cimmerian grasped Hercules by his curly, black locks and held his head steady, slamming his hips against his foe's bubble glutes.  With his victory, he has pleased his god, Crom, and devastated Zeus!

"You're soft," he mocked the demigod.  "And your hole massages me like a woman!  What good is muscle if you cannot win?"

Hercules could say nothing to defend his honor!  This barbarian had bested him in battle and now humiliated him sexually.  All he could do was to squeeze himself around the man's huge cock, hope that Conan would deposit his seed, and leave him to nurse his bruised ego!

Little did Hercules know, Conan was only getting warmed up.  It would be a long night for the defeated godling -- a night he would never forget.
Posted by Lucky Stallion at 10:39 PM