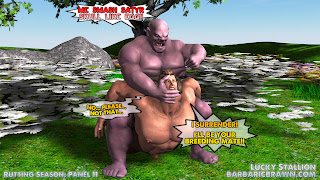 Thud kicked his foe, pushing him onto his belly.  He roughly mounted Keln's lower back and grabbed hold of his horns.  With one good yank, he pulled the satyr back and applied a camel clutch!

Keln groaned in pain as his upper body was stretched up and his arms were held back by Thud's meaty legs.  He could feel Thud's throbbing, needy cock poke against his aching back.  The goopy precum that flowed from its open slit ran down his back and onto the base of his tail.  He squirmed as he felt the monstrous lubricant drip down between his furry cheeks, where it found and coated his hole.

"GIVE UP!" Thud demanded one final time.  But Keln remained silent, refusing to submit!

Thud growled and shook his clenched fist.  He was ready to beat some sense into this goat man!  He then snarled his threat, "ME SMASH SATYR SKULL LIKE EGG!!"

"No... please..." Keln finally whimpered for mercy, knowing that the ogre would make good on his promise.  "Not that..."  Just as the brute drew back to make the first strike to his handsome head, the caprine stud finally shouted, "I SURRENDER!  I'LL BE YOUR BREEDING MATE!!"

Thud relaxed his arm and smirked.  He placed that hand upon the satyr's face and pet it gently.  The victorious stud had finally won the right to mate with his new bitch!
Posted by Lucky Stallion at 8:02 PM