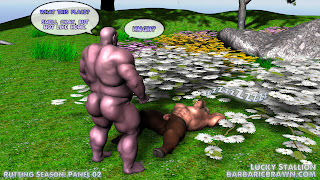 "What this place?" he grunted in mild disappointment.  The never-ending fiends of green were hard to get used to; he began to miss his usual habitat.  "Smell okay, but not like home."

It was then that he noticed the caprine creature that was lazing about in the big flower patch, snoring away.  The beast was half human, the ogre noticed, only he had a pair of thick, spiral horns coming from his head.  The satyr's penis, he then observed with great enjoyment, lay flaccid over his big balls.  Under those, Thud could make out Keln's furry butt.  His thick, stubby ogrehood quickly sprang to life at the sight.

The plum-colored brute greatly enjoyed fucking humans.  He considered them the stupidest of all of the world's upright creatures, and as such, they were easy prey for a quick seed deposit.  Even if this one was half-something-else, he decided it would be a worthwhile endeavor and a good fight to get his cock in between those dark, furry cheeks and relieve the stresses of his urge to rut.
Posted by Lucky Stallion at 12:31 AM