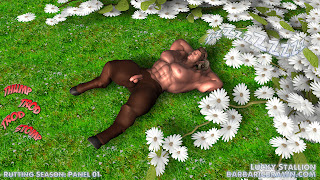 It was yet another warm spring afternoon as Keln lounged about near the bed of daisies that had become his usual hangout.  Keln, like many of his brethren, was a nature-centric satyr -- a half-man, half-goat hybrid.  Also, like his brethren, he had big muscle and a big appetite for sex.

Not an hour ago, Keln had encountered a man named Vulg who was training his body for fighting.  The human's weapon caused much of the greenery in the area to be ruined, angering Keln.  The satyr confronted Vulg and dominated him in a quick fight.  The satyr took his prize from the human's butt, bleating like a goat as he filled him with his seed.  With a slap on Vulg's rear, he left the man panting on the sundered ground.

Happy with his victory fuck and knowing that he was alone (except for Vulg, who'd left the plains in disgrace), the satyr returned to his private territory and laid himself down to rest for a while.

It wasn't long before his nap would be disturbed.  As his sleep was so deep, he never heard the sounds of another approaching.  Birds flew from the trees at the frightful sight of the big-bellied stranger.
Posted by Lucky Stallion at 11:44 PM