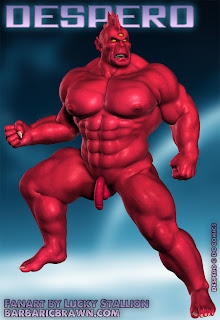 Poor Superman.  Only recently crushed and enslaved by Darkseid, now he's at the mercy of Despero atop a high-rise in Metropolis!  I've no story for this one like the Darkseid set, but it would be the standard fare of hero-meets-villain, villain-meats-hero. *grin*

Barbaric Brawn reader, Zindkeeper, suggested I try another DC villain, Despero.  Since I felt confident I could do him justice, I decided to make these renders of him playing with Superman.

In the first panel, I gave him pants and boots similar to the kind he wore in the 90's.

The hardest part was probably his third eye.  I have no way of doing it natively in my studio, so I added it in after in my image editor.  The yellow of his eyes definitely helped me out there.  I would have also liked to have had a better fin and bigger teeth for him, but I think it looks alright for a first try.

In the last two panels, Despero is mind fucking the fallen hero as he takes good care of the Backside of Steel.  I'm guessing it must be a pretty hot illusion for Superman to cling so tightly to his dominator.

Posted by Lucky Stallion at 6:46 PM