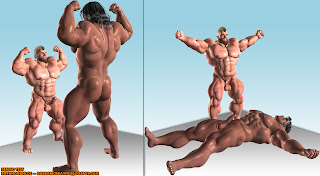 Dwarves: so short and stout, yet when they aim, they can pack quite a punch (and usually in the last place guys want to be punched).

I wanted to try and create a dwarf character for myself -- though I can't see myself using this guy for a good long while.  It was a fun change to make Remgo.  I could see him sporting a nice mohawk and bushy beard, so I added those to him.  His cock also sticks out with a curved tip, which is different from my usual creation.

Lortho (from the series The Last Battle) decided to approach little Remgo.  His ego was bruised pretty badly from his fight with Gorg, so he decided to wrestle this easy opponent and claim a victory!

Poor Lortho became Remgo's wrestling dummy in the end and wound up hitting the ground pretty hard.  But you won't ever hear Lortho say that.  Remgo had to have cheated somehow.
Posted by Lucky Stallion at 4:16 AM