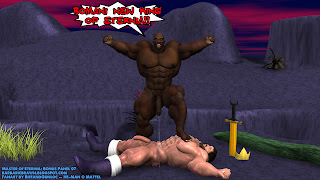 Bomani's intrusion into the throne room of King Randor was abrupt and thunderous.

Try as they might, the Masters of the Universe were no match for the new wielder of the Power of Grayskull.  The black behemoth drove them to their knees and forced each of them to service his proud manhood.

One by one, he enslaved them.  All that was left was the king himself...

The horrified King Randor put up a good fight, but in the end, he, too, succumbed to the might of the Black King of Africa.

Randor's moans of arousal could be heard throughout his domain as Bomani filled him with his hefty meat.  Though he frequently partook of his male subjects and enemies, Randor had never known the feel of another man inside him.

Using only his cock, Bomani had ensured that the Eternian King would surrender without condition and be his for life.

With the dethroned king draped over his shoulder, Bomani promised the others that he'd be back to claim the riches of the lands.  Their only responses were the rising of their cocks once more.

Bomani brought Randor back to the battlefield, where he found He-Man and Tuskar resting.  He tossed the white man to the ground like a sack of meat and planted his foot firmly atop his chest.

King Randor would be taken back to Earth to join his son as a slave to the most powerful man in the universe.

The End
Posted by Lucky Stallion at 2:45 AM