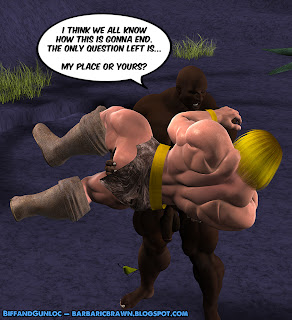 One more down!  And this time it wasn't over 100 panels -- thank goodness for my sake.

I had a lot of fun with this one.  It was nice to go back to Tuskar and Kugo, even if my little tale upended their lives (well, Kugo's much more than Tuskar's).  Kugo will be fine, though.  Bomani can be bull-headed, but he does love his daddy.

He-Man was a fun one to play with.  I know that I took liberties and changed him to suit my needs, but I hope that I kept at least enough of his mannerisms to leave him recognizable.

Bomani, as it turns out, actually wasn't meant to be Kugo's son in the very beginning.  It was right as I started work on the third panel that I had the idea to make this beefy black stud royalty.

The squiggly words that the shaman says on panel 08 actually read, "Prince Bomani
will defeat He-Man of Eternia."  That crafty shaman knew the whole time!

I'm not sure if anyone noticed this or not, but He-Man regained his muscles during his trip to Earth.  I didn't want to leave him the only diminished character of the four, so I replaced him with his more-muscular model.  I guess I can explain it away by saying Bomani's semen (also infused by the Power of Grayskull) gave him back some of his old strength?  Sure, why not.

I hope you guys enjoyed this one!  I'm going to be taking some time off to think about what I'll do next.  There will be a few bonus panels for Master of Eternia in the coming days, so stay tuned for that.

I'll see you around.
-BiffandGunloc
Posted by Lucky Stallion at 2:17 PM