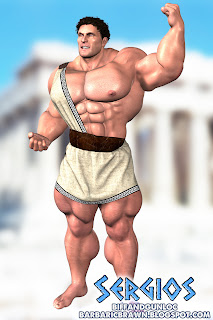 Sergios was a simple laborer who happily lived his life, maintaining the fields of his uncle's vineyard on the isle of Crete.

His laborious work over the years had earned him a hard body, and the genetics he'd inherited from his father had given him a thick, ample manhood the envy (and desire) of most of the men in the area.

One rainy day while Sergios was out protecting the grapes from flood, he happened upon a strange, gelatinous substance on the ground.  It was something incredibly sweet, he noticed.  And just holding it near his mouth made him hungry enough to eat it!

What Sergios never realized was that the sweet jelly he was eating was none other than ambrosia, the food of the gods!  The ambrosia had granted him the gift of immortality!

Zeus, the king of gods and men, was not happy.  One of his brethren was responsible for dropping ambrosia to the mortal land -- but his investigation would have to wait.

Sergios must be brought to his knees before he realizes his immortality and upsets the balance of power on Earth!
Posted by Lucky Stallion at 1:28 AM