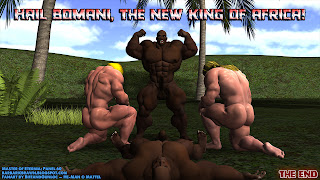 It was finally over.

Kugo, flat on his back and spread eagle, lay still as his mighty son flexed and grunted in victory!

Bomani had finally assumed his rightful place as Black King and was ready to rule.

He-Man and Tuskar knelt before their master, offering him their unwavering allegiance.

Bomani lifted his dad's defeated body into his strong arms and carried him around the various tribes, proving his victory to the people.  They gasped in awe at Bomani's muscle, and they, too, knelt before their new black king.

He-Man and Tuskar were grabbed by the strongest of warriors of each village and were made to service their throbbing cocks.  He-Man, unused to such treatment, struggled at first, but was easily subdued when the warriors held him down and pushed their lengths into his hole.

The warriors whooped and cheered over Bomani's newest slave, the white barbarian from a planet far away.  Not wanting to be left out, Tuskar raised his butt and presented his hole to the group.  An all-night celebration was held on that very spot!

One day soon, Bomani would return to Eternia to fully conquer the planet that gave him his awesome power.

The End
Posted by Lucky Stallion at 1:17 PM