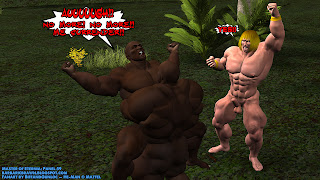 Bomani became frustrated that his father wouldn't submit in the torture rack.  He dropped Kugo to the ground and stomped his back several times with his foot!

The black king groaned in agony, but still refused to give up his reign over Africa!

Bomani decided that enough was enough.  If his father was that determined to retain his title, he'd crush it out of him!

Kugo screamed and bellowed in his son's bearhug!  Even his throbbing manhood was crushed against the prince's rock-hard abs!

He-Man, having bested his competition, came over to watch his master squeeze Kugo's muscular body without mercy!

The Eternian was becoming more and more savage with every minute he spent with these barbaric Earthlings.  His civilized upbringing had faded; all that remained was a desire to see this black bull of a man triumph over everything and everyone.

Bomani gave the dethroned king one last squeeze to reassert his dominance before dropping him to the ground.
Posted by Lucky Stallion at 1:01 PM