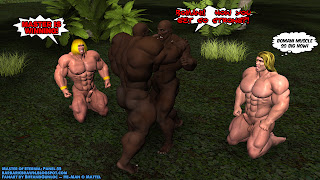 Upon returning to Africa, one of the first things that Bomani did was to find his father, Kugo, and challenge him for his title as king!

Kugo accepted and the two began to fight.  Their pale-skinned slaves sat nearby to serve as witnesses.

Tuskar couldn't believe how much bigger Bomani had gotten.  He was only gone for a short time, and now he was beefier than his father!

He-Man grew excited by the display of the men wrestling for supremacy.  Both he and Tuskar cheered for their respective master.

"BOMANI!  HOW YOU GET SO STRONG?!" Kugo grunted, unable to comprehend how his son had grown in size so suddenly!  In every one of their previous matches, he was the one who'd been bigger, stronger, faster, and more skilled in the art of wrestling.

But now, Bomani was showing him that things were about to be a lot different!
Posted by Lucky Stallion at 12:49 PM