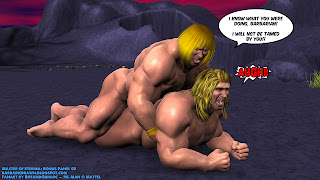 He-Man roughly shoved his slave to the ground and immediately mounted him!

The Eternian was angry.  He suspected that Tuskar was learning all of his weak points in an effort to someday reverse their roles as master and slave!

"I know what you were doing, barbarian!" He-Man hissed as he pressed his wet, throbbing meat against Tuskar's hole.

"Me... me not do anything, Master," Tuskar managed to say between moans.

"I will not be tamed by you!!" the fallen hero shouted, skewering Tuskar with his thick cock!

The barbarian grunted in pain at the sudden intrusion!