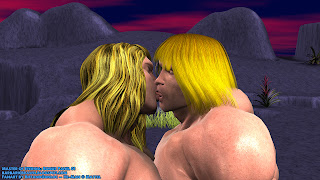 The time had come for Bomani to return to Eternia.  He-Man had told Bomani of the kingdom where he hailed, and of its protectors and their weaknesses.  Bomani fantasized about his inevitable domination of King Randor.  He would fuck the false King of Eternia into submission and destroy the throne!

He commanded He-Man and Tuskar to wait for his triumphant return as he stomped toward Prince Adam's former home.

He-Man's feelings toward Tuskar had softened over time, and the fallen hero found himself aroused every time he and the barbarian were alone.

With their master gone, they decided to share a more intimate moment.

Tuskar leaned in and took a kiss from the manly alien.  Their warm, wet tongues slid and wrestled together as their lips met and locked tight.

He-Man wrapped his beefy arms around his fellow slave's white body, pulling him closer.  The throbbing cocks of the two studs rubbed, drooling precum over each other.

"He-Man want fuck," the Eternian mimicked with a lewd grin on his handsome face.
Posted by Lucky Stallion at 9:54 PM