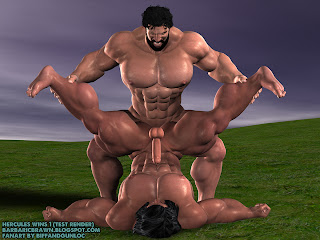 A heavy thunder crackled and rumbled over the battlefield where Hercules stood chest-to-chest with Conan the barbarian.

The two musclestuds had come to lay to rest the rumors that the other was the stronger man.

It was on that valley that Hercules declared victory over the surly barbarian!

With the Cimmerian on his back and legs spread wide, Hercules sank his throbbing manhood deep within the backside of his fallen enemy!

Conan growled in shame -- shame that he'd lost and that he now lay as the demigod's bitch.

Zeus, Hercules' mighty father, rumbled his approval through crashing thunder above.  He watched with pride as his son bred the one who would worship Crom over he.

"You are defeated, savage barbarian!" Hercules grunted as he plowed, arrogantly bouncing his pectorals.  "You never stood a chance of besting the son of Zeus!"

Hercules would eventually take pity on the barbarian and leave him to wallow in his shame, but for the next several hours, he was determined to destroy Conan's hole and make his victory forever known to the world!
Posted by Lucky Stallion at 1:06 PM