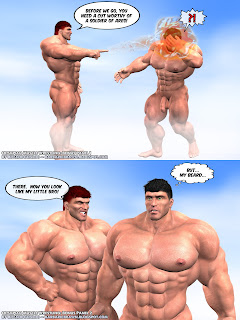 "Before we go," Ares said to Hercules, raising his hand to the beefy half-god, "you need a cut worthy of a soldier of Ares!"

Hercules grabbed his head as a swarm of the manly magic of the god of war engulfed it fully.  Before he realized what was happening, his curly hair was trimmed and his facial hair was completely gone!

A warm breeze blew across the demigod's bare face, suddenly making him feel quite naked.  He touched the soft skin around his jaw and grunted in surprise.

"There," Ares said with a laugh.  "Now you look like my little bro!"

Stunned, Hercules couldn't stop thinking of his beloved beard.  But the memory of his facial hair would remain only that: a memory.  Ares always gets what he wants, and his magic would not wear off until he commands it.


Hercules and Ares wrestling...  This idea was incredibly spur of the moment and meant as a stop-gap to fill in time while I waited for the next version of the studio to come out -- which it actually just did!

I hope you enjoyed this tale of pro wrestling gods in the sky.  I know it's a very strange little tale, but I enjoyed it.  And just in case you were wondering, this story is set in a timeline where Hercules never met Sergios.

And now I'll take some time off to plan the next story (which pits Tarzan against an African native named Jabari).  Thanks for visiting Barbaric Brawn, and I'll see you guys later!