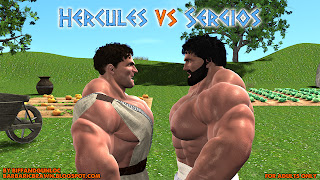 In this latest adventure, we go to the beautiful Greek island of Crete.

Sergios was an ordinary man -- the nephew of a vintner -- who worked hard in the fields to cultivate fruits and crops to feed his family.  One rainy day, while protecting the wine grapes from flood, he accidentally discovered a strange substance on the ground.  Unknown to Sergios, it was ambrosia, the food of the gods!

Hercules vs Sergios is Barbaric Brawn's fourth series.  Hercules, the halfgod son of Zeus, is tasked by the king of the gods to wrestle and conquer Sergios before he learns of his new gift of immortality!

But Sergios isn't any ordinary mortal.  He will not simply kneel and submit to Hercules like many other men have.  He will fight and force the demigod to prove his heroism!

If Hercules should prevail, he will drive his cock deep into the mortal-turned-immortal's hole and flood it with his godly seed.  Hercules has broken many men with his meat and forced them into whimpering, submissive slaves.

But if Sergios defeats Hercules, the beefy godling will become his for a thousand moons...
Posted by Lucky Stallion at 1:19 AM