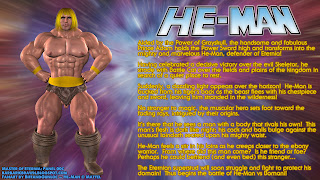 Aided by the Power of Grayskull, the handsome and fabulous Prince Adam holds the Power Sword high and transforms into the mighty and marvelous He-Man, defender of Eternia!

Having celebrated a decisive victory over the evil Skeletor, he strode with Battle Cat over the fields and plains of the kingdom in search of a quiet place to rest.

Suddenly, a dazzling light appears over the horizon!  He-Man is bucked from his tiger’s back as the beast flees with his chestpiece and sword, leaving him stranded in the wilderness!

No stranger to magic, the muscular hero sets foot toward the fading rays, intrigued by their origins.

It’s there that he sees a man with a body that rivals his own!  This man’s flesh is dark like night; his cock and balls bulge against the unusual loincloth seated upon his mighty waist.

He-Man feels a stir in his loins as he creeps closer to the ebony warrior.  From where did this man come?  Is he friend or foe?  Perhaps he could befriend (and even bed) this stranger...

The Eternian superstud will soon struggle and fight to protect his domain!  Thus begins the battle of He-Man vs Bomani!
Posted by Lucky Stallion at 1:11 PM