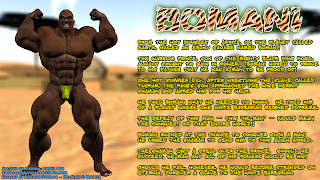 From the hot jungles of Africa, on the planet called Earth, hailed an ebony savage named Bomani!

The warrior prince, son of the mighty black king Kugo, always sought to gain in power.  Bomani hoped to prove to his father that he was a man to be proud of!

One hot summer day, after wrestling the slave called Tuskar, the king's son approached the wise hermit shaman and asked him for his help.

He told Bomani what he needed to know.  He told him of a planet where one white barbarian reigned supreme.

The defeat of this man -- this "He-Man" -- would mean the conquest of that entire world!!

Bomani rushed at the chance to conquer such a man!  He urged the shaman to send him to this alien world.

The shaman cast a spell over the prince.  Should he succeed, He-Man and all of his powers would be his!

Should he fail, however, he would become stranded on Eternia, forever a slave to the white barbarian.
Posted by Lucky Stallion at 1:24 PM