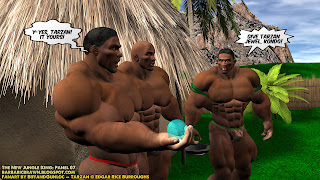 Njau immediately snapped out of his fantasy and turned to his friend.  "Give Tarzan jewel, Kondo!" he implored, not wishing to invite the wrath of the jungle lord.

Njau still remembered the day that he stumbled upon Tarzan in the process of wrestling a behemoth of a crocodile into submission.  The green beast thrashed and struggled for freedom, but the human was stronger and smarter, and he was forced to relax and accept whatever fate this two-legged scaleless creature had awaiting him.  Luckily for the beast, Tarzan took pity and allowed him to escape.

Njau knew that a man like that could easily take down three men barely skilled in the ways of combat and make them pay with their bodies.

Kondo immediately ceded ownership of the beautiful stone.  He held it out to the white man and said, "Y-Yes, Tarzan!  It yours!"

Without hesitating, Tarzan snatched the jewel from Kondo's trembling hand and took a step back.  His efforts to frighten the three had worked, he was happy to see.  He now had the jewel safely out of their possession.
Posted by Lucky Stallion at 1:52 AM