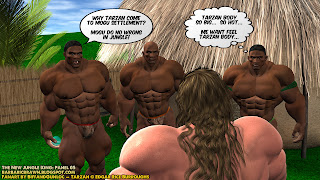 "Why Tarzan come to Mogu settlement?" Kondo finally summoned the courage to ask.  "Mogu do no wrong in jungle!"

Tarzan knew this was true; the Mogu were a peaceful people.  Yet he could never trust any man to stay the same forever.  Tarzan had learned many years ago to keep vigilant or suffer the same fate that has befallen many men of the jungle.

Zuberi remained silent and hoped that Tarzan would soon go away.  He and Kondo wanted to hurry the jewel back to their wise men and receive praise and admiration for their feat.

At that moment, however, Njau held only lustful desires in his heart.  While Tarzan's focus was upon Kondo and the shiny blue rock in his hand, Njau's hungry eyes swept over the ape man's tan, muscular frame.

Thoughts of the king of the jungle's naked white body writhing under his hard, ebony frame turned him on immensely.  His cock stirred in his pouch, and he struggled to keep his arousal from showing.
Posted by Lucky Stallion at 1:24 AM