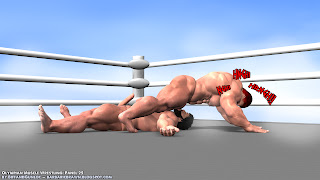 Ares shoved Hercules onto the mat.  The demigod rolled with a groan and rested on his back.  Ares strutted over and dangled his erection over his little brother's mouth.  Hercules stared at its length and shuddered.  Ares placed the tip of his throbbing cock to Hercules' lips and pushed inside!

The god of war then performed a series of pushups, forcing his mammoth meat into the depths of Hercules' mouth with each descent.  The half-god's tongue and lips caressed and pleasured his master's bulbous cockhead. 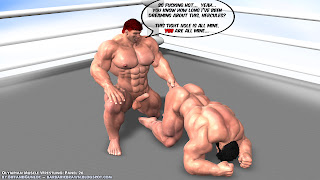 Hercules struggled to control his trembling as he presented his butt to Ares.  His hole puckered and quivered as the god of war stared hungrily at it.

Suddenly, he felt his big brother's saliva-coated fingers gently stroke his entrance.  He let out a low moan of arousal, prompting Ares to chuckle.

"So fucking hot...  Yeah..." Ares hissed lewdly.  "You know how long I've been dreaming about this, Hercules?"

As Ares' first two fingers slithered their way into his soft, warm insides, Hercules suddenly realized why it was Ares had always antagonized him.  It was to bring him to his knees and destroy his pride with sexual surrender.  And now he'd finally done it.  Ares had won.

Hercules clenched his teeth and moaned in frustration as Ares took his time in preparing him to fuck.  Ares opened and rotated his fingers, causing Hercules' entrance to stretch and loosen.  As he pulled them back out, the defeated Olympian's hole sucked on them, not wanting to let them go.

He was ready, Ares thought with a smirk.  Hercules was ready to be bred.
Posted by Lucky Stallion at 7:58 PM