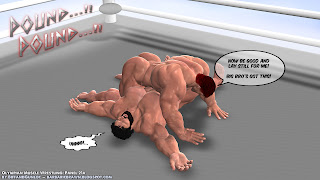 Ares bounced his pecs and grunted arrogantly as he strutted around the heavenly wrestling ring.  Hercules remained where he lay, wanting only to rest and forget this horrible day.  Why did he challenge Ares to wrestling?  He groaned at his stupidity.  Of course he was no match for his elder brother -- a fully-fledged god.  His pride and arrogance at his feats of heroism on the world below had not only clouded his judgment, it had cost him everything.

The hot, sweat-slicked weight of the god of war's toned torso soon pressed firmly against his own, snapping him from his painful daydream.  Ares had him pinned to the mat! 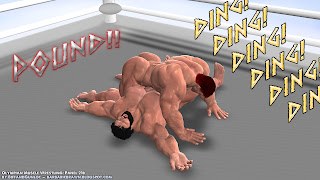 Both wrestlers heard and felt a loud, booming POUND from somewhere below the ring.  Hercules realized what that drum was for.  On the third count, he would lose the match!

Hercules accepted the fact that he was finished.  Like a jobber from many, many centuries in the future, he merely lay there and moaned.  A second POUND, louder than the first, sounded from below.  It shook the ring with its fury.

Finally, with the third POUND, Ares was victorious!  A series of loud dings from the magical bell rang, signalling the end of the match! 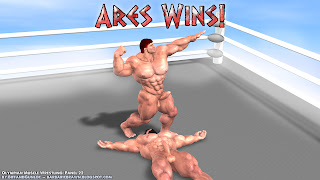 The god of war stood over his defeated brother, Hercules, and struck a victorious pose.  His cock quickly grew hard and bounced in excitement for what was to come.

Ares' already gargantuan ego swelled even higher with his defeat of the arrogant, half-blooded Hercules.  Finally, the quarrel that both brothers held for so many years was put to rest, and Ares would assume his rightful place as master of the demigod.

Hercules lay in bitter defeat below the one who had fairly and justly conquered him.  He dared to look up only once; he watched as Ares soaked up every moment of his victory with a show of his most muscular poses.

Hercules then caught sight of Ares' throbbing cock.  His hole suddenly quivered in anticipation, as though it knew what that monstrous male sword would soon do to it.  He couldn't explain why at the time, but the thought of serving his superior brother turned him on immensely.  The godling's cock grew and hardened as evidence of his arousal.

It was time to pay for the price of his failure and take his place as slave to this dominant being of masculinity and strength.  He belonged to Ares now.
Posted by Lucky Stallion at 12:48 PM