Ares scooped Hercules' bulky weight into his arms and lifted him high overhead.  Hercules' sore and tired limbs dangled under him as he lay in the grasp of the god of war's mighty hands.

"Ares... No...  No more..." the demigod moaned in surrender.  It destroyed his pride as a man to beg his opponent for mercy, but he couldn't struggle any longer against such power.

But Ares had no mercy for Hercules that day.  "No way, baby bro!" he grunted.  "You had your chance to bow down!  Now I'm gonna finish you off!" 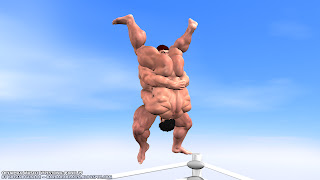 Ares squatted low and used his godly legs to leap high into the air!  He turned Hercules upside down and quickly positioned him for a reverse piledriver!

To Hercules, time seemed to go in slow motion as Ares wrapped his arms around his torso in an unbreakable hold.  He began to feel strangely intoxicated by the heat that emanated from his opponent's body.  Ares' heavy, sweaty balls and the base of his thick, masculine cock rubbed against his face, causing his own to swell and stir as it pressed against Ares'.

The half-god clung to Ares' body as they descended together to the mat below... 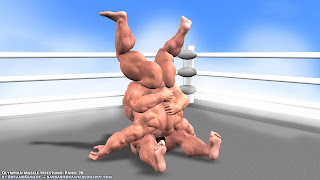 Hercules' head, nestled snugly between his big brother's thighs, was rocked by the impact!  His limbs and body went limp.  Ares held onto Hercules' lower back, keeping steady for a little longer.

Finally, Ares let him go.  The weary demigod collapsed to the mat with a deep longing for rest.  He lay still and prayed to Zeus that this ordeal was finally over...
Posted by Lucky Stallion at 7:26 PM