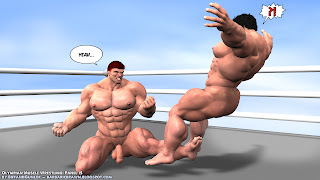 "Yeah..." Ares moaned lowly.  He felt a stir in his loins as he stood and jumped into the air. 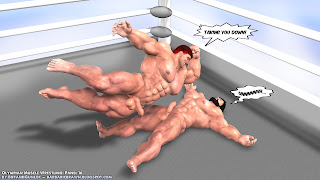 "Taking you down!" Ares roared!

He came down hard upon his little brother's beefy chest, slamming his elbow into the mountainous pectorals the demigod had spent years building and perfecting.  The god of war's arm felt like a blunt mace of steel pulverizing his muscles. 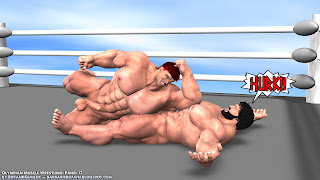 Hercules grunted and cried out in pain.  Ares, knowing that Hercules wouldn't be able to put up a fight, took a moment to breathe.  He ran his hands over Hercules' hard chest and abs and admired what the Olympian half of him was able to accomplish on the world below.

Ares stood and scooped up the sweat that poured from his torso.  With a crude flick of his wrist, he sent his hot, godly sweat flying onto Hercules' downed body.  It was time to end this pitiful excuse for a wrestler, he considered.  It was time to show Hercules who ruled this ring.
Posted by Lucky Stallion at 9:52 PM