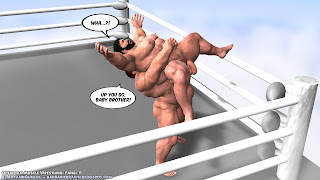 Ares wrapped his arms around Hercules' beefy torso and lifted him high off the mat!  The world suddenly turned upside down just as the studly hero of humanity regained his senses.

"Up you go, baby brother!" he taunted, bringing a stunned Hercules up and back!  The demigod barely put up a struggle as Ares flawlessly executed his attack! 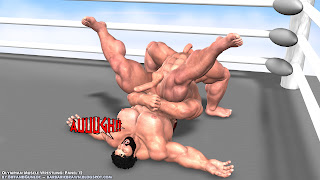 Hercules' upper body took the brunt of the impact as Ares forced him down to the mat in a suplex!

Hercules cried out in agony, but could do nothing but stay in Ares' grasp and endure it.  The war god grunted and stomped his foot repeatedly, forcing his brother to feel every shockwave of pain all over again.

Ares finally let Hercules go.  He stood and flexed his superior body.  The match was going exactly as he'd hoped.  It wouldn't be long before he destroyed his little brother's delusions of being anything but yet another soldier of Ares.
Posted by Lucky Stallion at 9:08 PM